By modifying the partialGroup, partialPercent, selectedStrings, partialStart and blurAmount properties you can further customize the effects in order to emphasize the artistic side of the text effect. This way you can apply the effect:
This partial effect consists of two animations each on a speciffic group of text: the selected parts and the leftovers. The first animation is the main effect applied on the text elements selected from the partialGroup property (letters, words, lines or specific strings). This animation will last as long as the time specified at the tweenDuration property (in seconds). The second animation is a simple alpha fade effect (to which you can add some blur) applied on the text elements which were not included in the main effect, the leftovers.

If you need to apply the XYScale effect only on half the letters, you set the partialGroup to "letters" and partialPercent to 50. This way, the XYScale is applied on half the letters and on the other half, the letters left out of the effect, an alpha fade effect is applied. This is the second animation. This alpha fade effect can start later than the main effect and will last as long as the main effect.

Besides the alpha fade in or out, the second animation can also support blurring, in case you would like to add a little blur to the second alpha fade animation. This is done, using the blurAmount property.

You have a TextField containing some text: 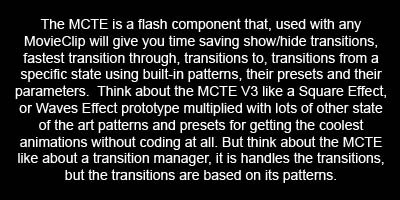 Now, of course, you can apply a few patterns on the text, using the TxEff component and you can even change the way the pattern applies, by using one of the pattern's presets. But what if you would like to change a little the way that preset is applied ? By changing the five previously mentioned properties, you can do just that. Here are a few scenarios:

1. You need to apply the effect on only a third of the letters, the rest of them, using a fade in or out effect:

In the next image you can see how the component randomly selects 33% of the letters and applies the selected effect on them. As mentioned before, on the rest of the letters, it applies a fade in or out effect (according to the show or hide transition) using alpha fade and blur (if the blurAmount parameter has a positive value). The fade effect will start when the main effect has reached a third of its tween. 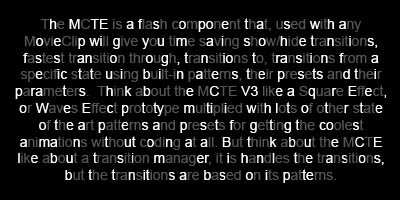 2. You need to apply the effect on half of the words in the text 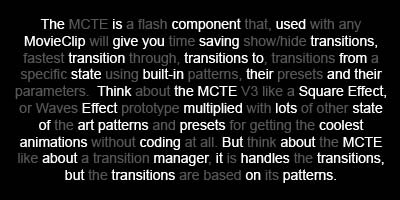 3. You want to highlight, during the effect, the words "MCTE", "animations" and "transitions" (that is done by applying the effect only on those strings, the rest of the text having a fade in or out effect applied on it with a small amount of blur); you also want the second animation to last a quarter of the main effect: 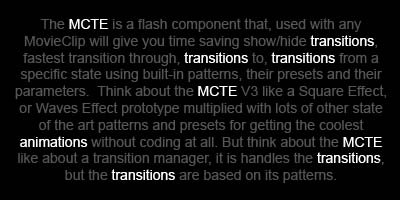 The best jQuery slider for all types of sliders, from dynamic feeds to image sliders

We accept PayPal and
Amazon Payments